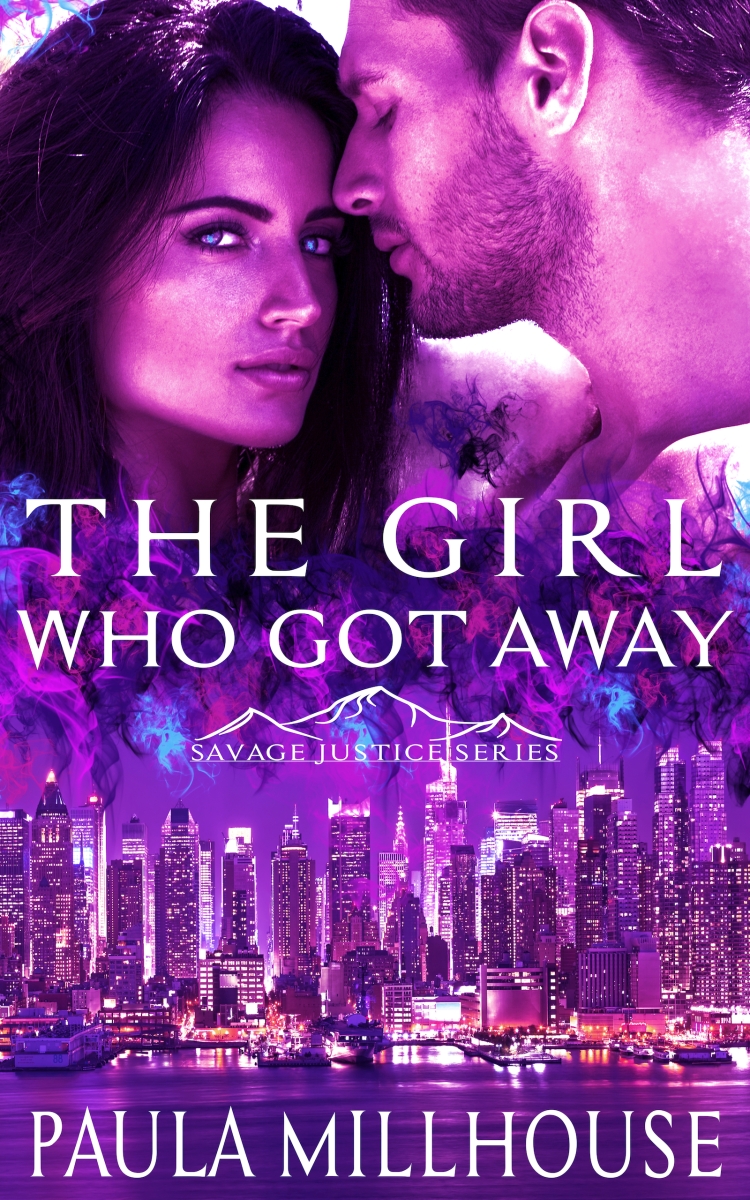 Sometimes they end in murder.

When Evie Longfellow accepts the blind date from hell everything sane about her life changes. Singled out and kidnapped by a mafia kingpin, she escapes only to run a mysterious stranger off the road. But she’s not safe yet—her stalker’s determined to take Evie as his sixteenth victim.

Former FBI hostage negotiator Nick Franklin is still connected enough to his law enforcement colleagues to help Evie deal with her serial killer. When she runs him off the road, the last thing Nick wants is another case to deal with, but there’s something about her that turns him into full-on protector. And the closer they get, the hotter the sparks between them ignite.

With their worst enemy closing in on their small-town hideaway, their greatest fears about savage justice may be realized. Nick must pull out all the stops to help them capture one of the FBI’s most wanted and stop Evie from becoming the girl who got away.

If you love romantic suspense and the pulse of an edgy thriller, then make Book I in the Savage Justice Series, THE GIRL WHO GOT AWAY, your next new book today.

Evie Longfellow slammed the black laptop shut silencing the high-pitched screams of a woman being murdered by a madman.

She reared back from the video, tumbling the Windsor chair behind her, sending Boo Boo her cat darting across the suite with a hiss. Evie wiped her eyes with her palms. Was that real? Her head was foggy from the night before, and they were in a strange place—How did the cat even get here? She’d left him in her apartment back in Manhattan to go on the blind date from hell.

Paulie Marino’s voice cycled through her mind. “I’ll be on my way to discuss this with you, Evie.”

There were scenes she’d taken in as an author, haunting images she’d researched, rationalized, tolerated, then blocked. But this…

She bolted through the cottage guest suite. Speechless. Incoherent. The cat growled, low and deep. She seized him and put him in his crate with shaking hands. She grabbed her purse, then rushed to the door. “We gotta get out! Now!”

She turned the knob.

Scrambling, she tried the handle again. The doorknob turned, but it spun all the way around. The door wouldn’t open. She slammed her fist against the wooden barrier. “Somebody open this Goddamneddoor!”

Evie raced across the room, lunged for the drapes and dragged them open. Her fingers trembled as she searched for a latch.

No way out? There has to be a way out.

She touched the molding and inspected the window frame. Made out of one-inch thick acrylic, like the glass on massive aquariums at amusement parks, it stood between her and freedom. “No.”

She glanced around for something to throw through it.

Nothing would work! The delicate antique writing desk. No. The Windsor chair. No. The Dell computer. The king-sized bed. Several useless cooking utensils in the kitchen. No. No. No. I have to leave here. Now.

Evie ran for her purse and fished out her cellphone. Facing that animal was not an option. Good. The phone’s got power!

Her heart crashed in her chest. She paced around the room, checking for a signal, and even stood on the bed hoping to find a connection. When she edged close to the window her phone picked up one bar, and she tried to dial out, but got nothing.

She didn’t know if she had 911 capability, but didn’t everyone? It was worth a try. She checked the 911 signature feature on the phone and dialed. If she couldn’t escape, someone would have to come for her. Go through. Go through! Go through!

She couldn’t be certain if 911 would pick her up, so she dialed again. Evie prayed the call would go out. A movie trailer about a guy stranded somewhere, in a coffin, trapped in total darkness with only a cellphone, flashed through her mind. God, please!

That wasn’t going to happen to her. She gasped, determined this room would not be her grave.

Sure, if someone was looking for her they might find her, but the sad thought that no one would miss her tangled her thoughts. Evie’s eyes flew up to the Dell again. The video. That maniac would be here soon.

She held her phone up and scrutinized the screen. The little battery icon flashed three times, and then the power symbol winked out. As her only connection to the outside world died she grimaced and squeezed her eyes shut.

“Damn!” Undeterred, she raced to her suitcases. She’d placed the power-cord carefully in the side-zip pocket yesterday so she wouldn’t forget it for her book tour. She unzipped it, and blinked her eyes in disbelief.

She rifled through the suitcase in search of a lifeline. She scrambled forward to find some way to save herself.

She searched the room again to make sure she hadn’t missed a landline, and she still found… nothing.

He took it out. He trapped me here. He’s going to kill me.

She jumped up and checked the door handle again. She pushed against the unyielding exit, and spun the doorknob, but the damned thing wouldn’t budge. She slammed her fist on the door and screamed again. “Let me out of here!”

Tears welled and threatened to consume her. “Stop! Don’t cry!” Her knees went weak, and Evie grabbed the corner of the useless antique desk. “There has to be a wayout of this. Think, Evie! Think!” Screaming the words out loud startled her back to reality.

Her eyes flickered over to the paper on the desk, and she did what she always did when she couldn’t punch past a wall in her stories. She picked up the pen and put it to paper. She furiously wrote out the scene she found herself in, and asked her cast of characters what they’d do to escape.

It was Evie’s way of praying. She asked, and they answered. All she had to do was follow them around and take notes. It worked like magic for her.

“Ali! Luke! Edward! What would you do to break out of here? Help me, guys!”

“Take the bed-frame apart and crack the window,” Luke said in her mind, always the hero.

No. That would take too long.She tried to calm herself. The glass won’t break.

“Wait. Take the door off its hinges, Evie!” Edward said.“Use a screwdriver and a hammer to tap the hinges out of the doorframe.”

She listened in her head while they continued to argue. While Evie worked, her characters talked.

She fished her Swiss-army knife-tool-thingy out of her purse, flipped open the lever with the flathead screwdriver. Satisfied this would work, she used the marble base of an inkwell as a modified hammer to knock the hinges off the door. The heavy door protested at first with creaks and groans, but it worked. Marble crumbled in her hands, and scattered at her feet with a satisfying crunch. 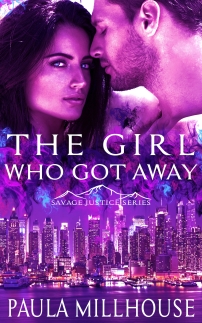 She looked outside and found the mansion’s grounds deserted. Evie grabbed her cat, shouldered her purse, and took off running. She checked over her shoulder to see if someone was chasing her. Her legs pumped, full of adrenaline, and she ran away from her prison. She dodged behind a bush, hiding, and then spotted what she needed.

She spied a garage off the main house, and she slipped inside by a side door. Thank God. It was empty except for a car.

She tried the door handle. It was unlocked, so she slid Boo Boo’s crate into the passenger side seat. Evie checked the driver’s side sun visor. A keyring with the Mercedes insignia tumbled into her lap. Yes! Unbelievable! Yes!

She couldn’t believe her luck. The garage bay door lay open with an invitation to freedom.

Evie cranked the black sedan into a purr. She threw the car into drive, floored the accelerator and drove like a bat out of hell, leaving the cottage of horrors behind her. Gravel blew up behind her as she sped away from the cottage deep in the woods.

It can’t be this easy. He’s going to try to kill you just like he killed that other girl. He’s probably watching you now.

She white-knuckled the steering wheel. She would get away from him. She wasn’t about to let that monster catch her again. She turned right onto a desolate dirt road, but there was nobody around to save her. Where the hell should she go? She didn’t know and she didn’t care. She drove forward, faster, taking the winding backroad turns so fast she almost lost control.

She had to find her way back to the highway. Put as much distance between her and that video as possible. The GPS read High Falls, NY, 10 miles north. Slow down before you kill yourself!

How long would it be before they caught up with her? Would he chase her down like a dog and kill her? He would, and she knew it. The cat crate slid across the passenger seat and collided with the door. Boo Boo howled.

Evie’s heart beat so hard it nearly came out of her chest.

She made a right turn onto a different road, and then a hard left.

She was alone. She sure as hell couldn’t go back to her apartment, because they knew where she lived. Jennifer? Yes. She’d go back to New York and find Jennifer. Wait just a damn minute!

Jennifer, her literary agent, had set her up on the blind date where she’d met the killer.

Evie shook her head and tried to clear her frazzled mind. An understanding made her frown. She was all alone now. There was no one in the universe she could turn to for help. Furious, Evie floored the accelerator in her desperate attempt to evade the killer.

Slow the hell down!

It was too late. The oncoming pickup truck was black. Big and black. She jerked the wheel right to avoid the collision. Was it them? Had they found her already? She punched the gas and the Mercedes fishtailed.

The back end of the sedan hit the rear fender well of the pickup and she went into a spin she could not control. When her head collided with the steering wheel Evie screamed for her life.

If you love romantic suspense and the pulse of an edgy thriller, then make Book I in the Savage Justice Series, THE GIRL WHO GOT AWAY, your next new book today.